The pentacle, or pentagram, is one of the most important symbols in Wicca, similar to the use of the cross in Christianity and the Star of David in Judaism.  The pentagram refers to a five-pointed star, while a pentacle is a pentagram enveloped by a circle. 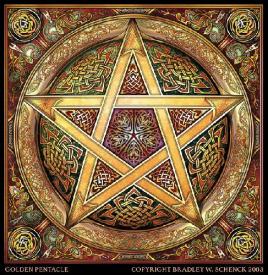 Pentagrams were first used as a religious symbol by the ancient Mesopotamians and the Pythagoreans of ancient Greece.  In Babylonia, the five points represented backwards, forwards, left, right, and above, or the points were associated with the planets Jupiter, Mercury, Mars, Saturn, and Venus (Ishtar, the “Queen of Heaven” above).

In China, Wu Xing is a five-pointed star representing the elements of Fire, Earth, Metal, Water and Wood, often used in medicine, acupuncture and Feng Shui.

Even Christianity used the pentagram as a religious symbol up until medieval times, where the five points were thought to represent of the five wounds of Jesus while on the cross. 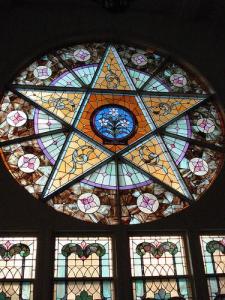 In ancient magical manuscripts, a ‘pentacle’ referred to a talisman inscribed with any symbol or character, including star-shaped figures like hexagrams and pentagrams.  Grimoires such as the Key of Solomon, the Lesser Key of Solomon, The Sixth Book of Moses, and the Fourth Book of Occult Philosophy contain pentacles, along with descriptions of their magical uses.

Towards the 19th century, occultists began discussing the pentagram’s orientation.  The spirit pointing upwards was thought to represent the power of spirit and wisdom over the four elements of matter, which was considered the ‘proper’ orientation of the pentagram.  An inverted pentagram, with two points projected upwards, was seen as the triumph of matter over the spirit, and was seen as a disruption of the natural order of things.

The Satanic ‘Sigil of Baphomet’ is an inverted pentagram, with two points up, surrounded by a double circle and containing the head of a goat.  In LaVeyan Satanism, this represents the physical world dominating over the spiritual world.

The number five is found throughout nature, such as humans having five fingers and toes and the five senses.  There’s the five virtues of the medieval knight from Sir Gawain (generosity, courtesy, chastity, chivalry and piety).  Agrippa’s ‘microcosmic man’ shows a human form on a five-pointed star, with arms and legs extended.  In Wicca, there is the five-fold kiss.  The planet Venus follows a pentagrammic precession sequence.  Even the core of an apple displays a five-pointed shape when cut laterally.

In Wicca, the five-pointed star represents the five elements of Earth, Air, Water, Fire and Spirit (or Akasha).  The Wiccan pentacle is always drawn with one point upwards, representing the spirit.  Pentacles are often used in Wicca to summon elemental spirits while constructing sacred space.  Some say the outer circle of the pentagram binds the elements together and brings them into harmony with each other.  The pentacle is also thought to be a powerful symbol of protection.